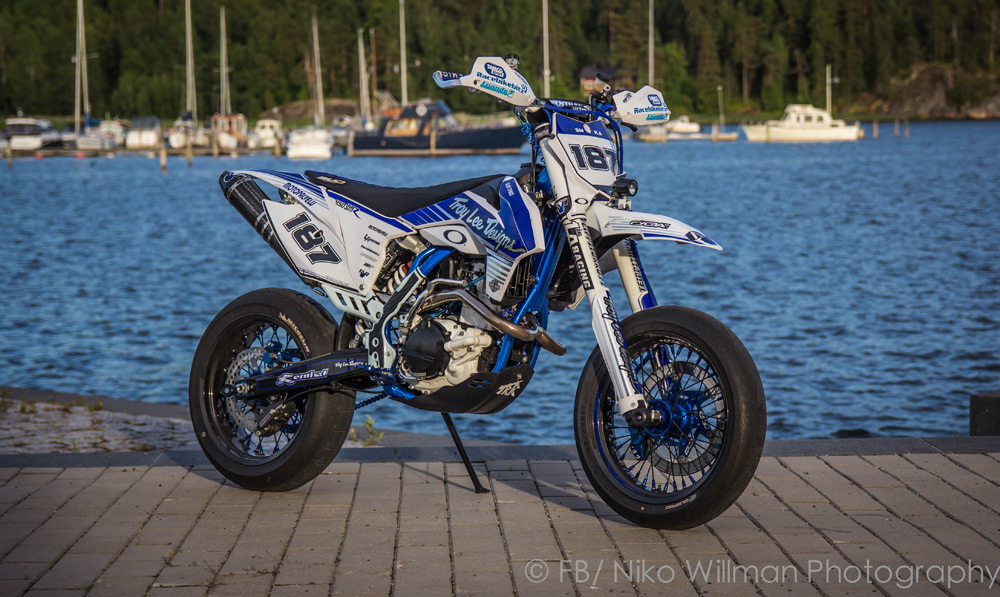 How about a small introduction of yourself to the readers of Supermoto Central?

First of all I'm 20 years old gearhead from Vantaa, Finland.

I have over 5 year long history in mtb/bmx, but nowadays I like motorcycles more.

I have always been a big fan of all kind of motorsports. Specially as I'm Finnish rallying have been long time favorite sport. Sadly they don't drive +500hp group-B cars anymore, but it's still hard driving and fun to watch. Moto-gp, mx/supermoto/enduro is of course close to my hearth.

My dad has owned motorcycles since i remember. Mostly mx bikes and supermotos. He have only ridden for fun / hobbying and so am i.

Dad's first supermoto was a KTM 560 SMR 2007, but it was built only for iceracing (lowered suspension, mx tires with spike tires) use. After that he bought 2009 450 smr and later a TM 450 smx for supermoto use.  My first supermoto was ktm sx 85. It had a bigger front brake from a 250sx and ktm original 16" supermoto wheels.

That was my first experience with supermoto like seven years ago. When I was 16 I had KTM EXC 125 supermoto for road use only. 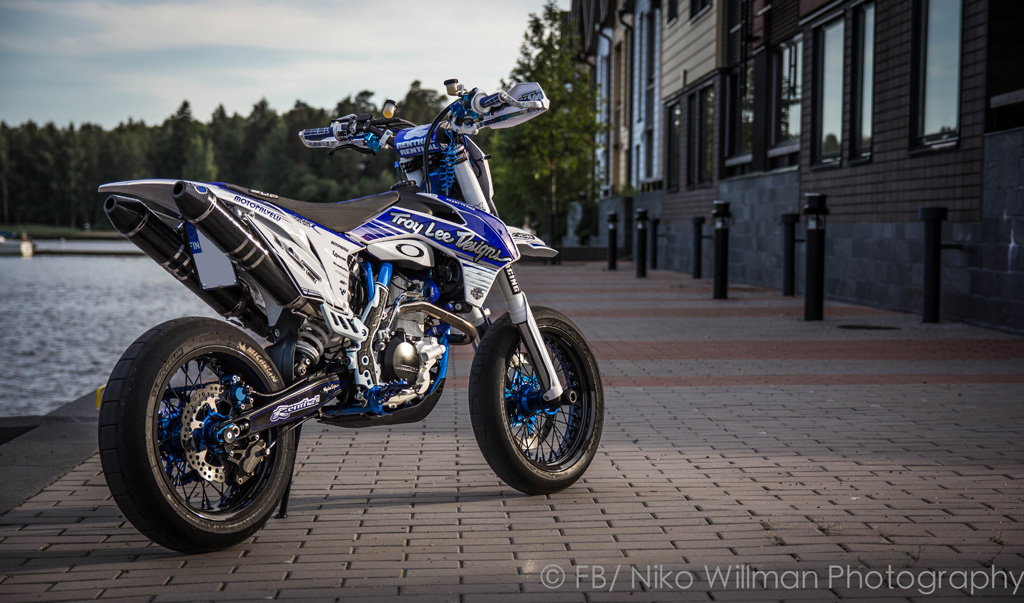 How did you get into supermoto and what do you find so great about it?

Mostly by my dad and friends. Supermoto is quite small hobby in Finland, we have under 10 real tracks meant for supermoto use. Still people are very focused and motivated to train hard. Top riders from Finland of course go overseas to train on the better tracks. Supermoto is a great sport, you can spent 4 hours on the track riding hard and after that your bike has only little dust on the plastics compared to motocross. SM is much more complicated than motocross I think. Suspension, slipper clutch, tires, brakes, quickshifter, everything has to be perfect. That's why i like it, bikes have to be in good shape and you have to know how to tune them. 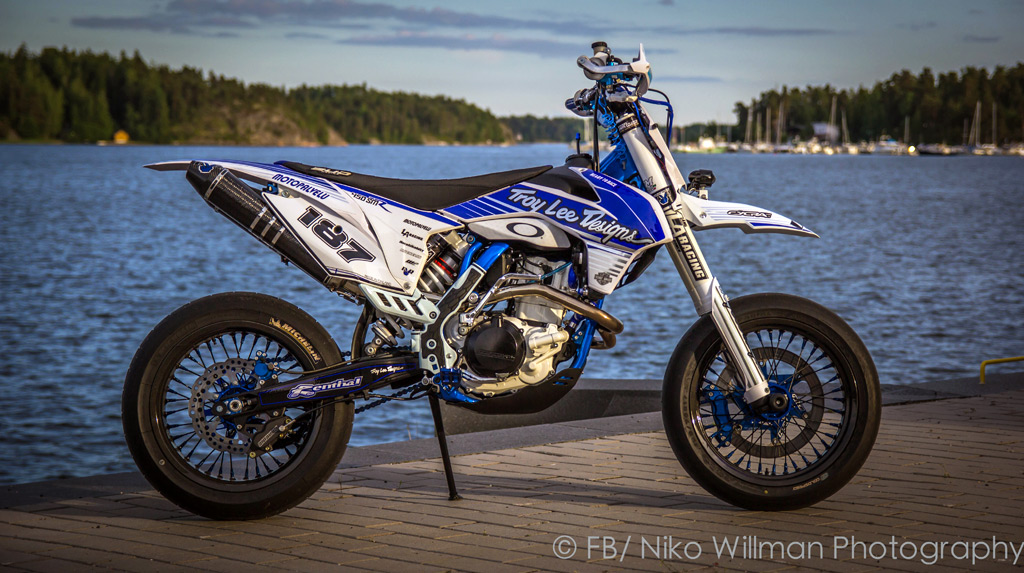 When and how did the idea for this project originated? What’s was the base for your project?

I was in the army in 2014 and I lost my 2-door classic impreza in an accident. I had plans already to buy a road legal ktm for the summer. So, well god gave me the answer, I didn't have my dream project car anymore, but now I had the possibility to get the bike I wanted and so I did. Couple months after the crash i went to Estonia and bought a bone stock KTM EXC 2012 enduro. It was fully stock, nothing new. It had a little racing history and something like 80h on the hour meter. It was just too perfect, good price and I have already had some plans to make little updates to it. 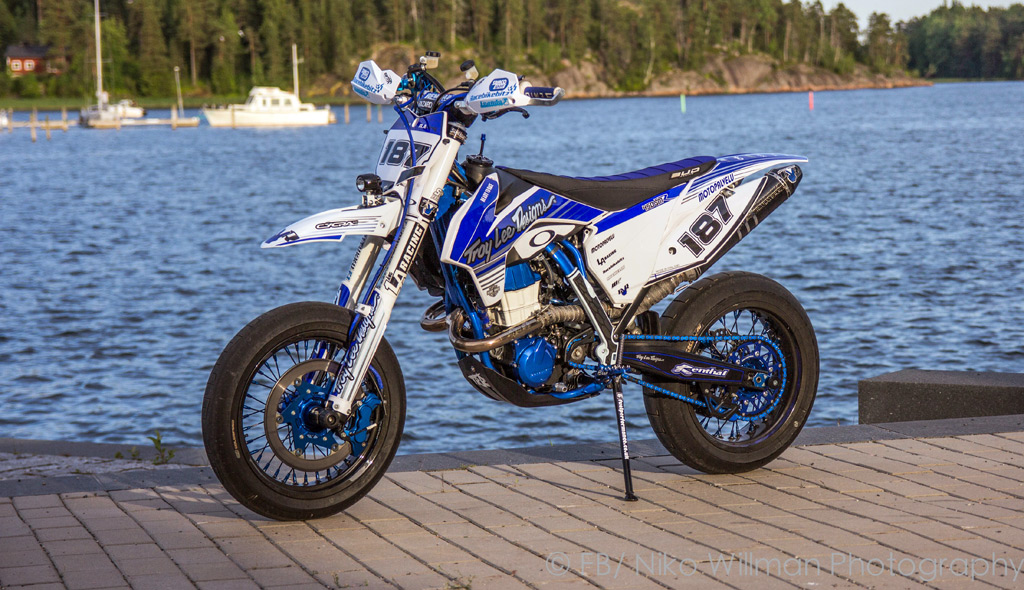 Can you tell us in short how the build went? Did you have any big problems or did it all went smooth?

I lost my driving license last autumn and in the same day I parted everything out. The frame and some parts went to powder coating... I wanted to do something special so painted and I decided to order some candy blue powder from America. I took like 2 months to get the powder to Finland. I waited on my parts from paintshop for almost 3 months, but it was my own fault as I wanted to get it painted with that candy. Paint looks amazing in the sun light, under the candy blue is chrome powder so it's really amazing/shiny.

Then I wanted to get some extra power so I sent my cylinder head and cylinder to a workshop called Turbotec here in Finland. It was the middle of winter and iceroadracing season was in full swing. So I had to wait for a month. When I got the parts back I had bought new valves and I wanted to get them fitted properly so I had to take the parts to the local machining shop. Then I waited a couple weeks again.

Not everything went perfectly when i was building the engine also and had to open the engine just when I got it all sealed up.

The bike has so much modifications on everything that it was slow process to get everything fitted and working perfectly. Just when I got the bike finished, my oil ring was somehow badly installed so it smoked like a 2-stroke. Had to replace it. Then when that issue was fixed I rode it hard like 2 hours on the road and the bike didn't work. It just didn't work, the idle was bad and it felt like it didn't get enough gasoline. I thought that maybe my cylinder head, more compression and exhaust modifications where causing it to run lean. A couple times of times it shut down from idle and didn't want to start anymore. I read for a couple hours on the internet and figured out that it had to be fuel pump that was on its last breath. And so it was. On the same day I ordered a new fuel pump and inline fuel filter from fuelperformance.co.uk and the bike was fixed. So I had many problems and issues but at the end it was all good mechanic training lol. 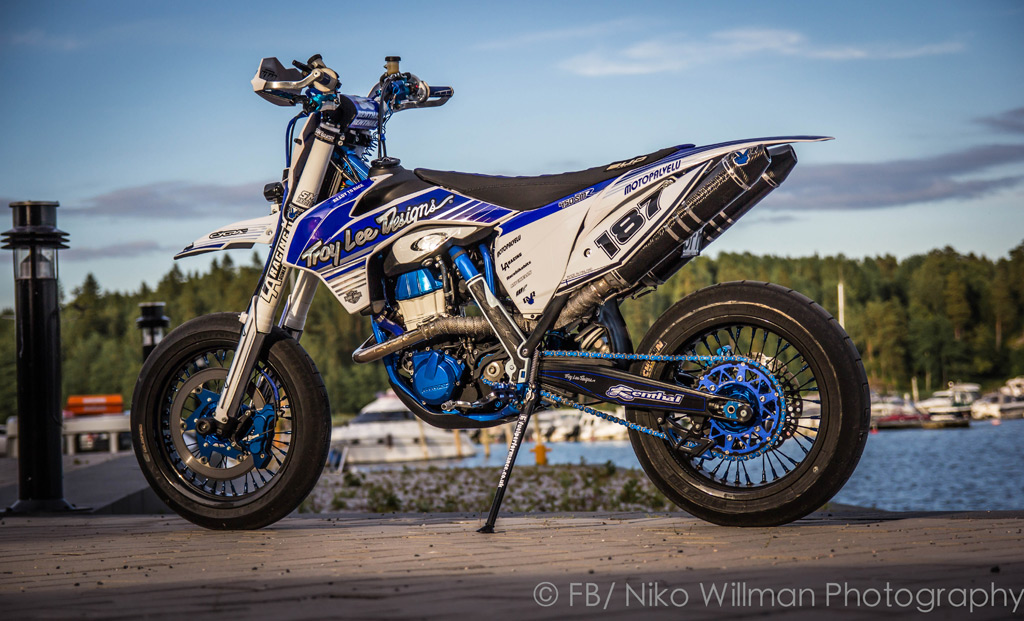 What do you use your bike for? Do you ride it on the street or just take it to the track once in a while?

I didn't have the time yet to go and try it on the track, but when my holiday starts I sure will. Now I have only been having fun poppin' wheelies with my friends on the silent roads at midnight. I have lowered/stiff suspension, slicks, suter slipper and big brakes so I have everything i need to hit track I think. Still theres that fun fact that I can hit the local cafe-bar/gas station with a race ready supermoto. 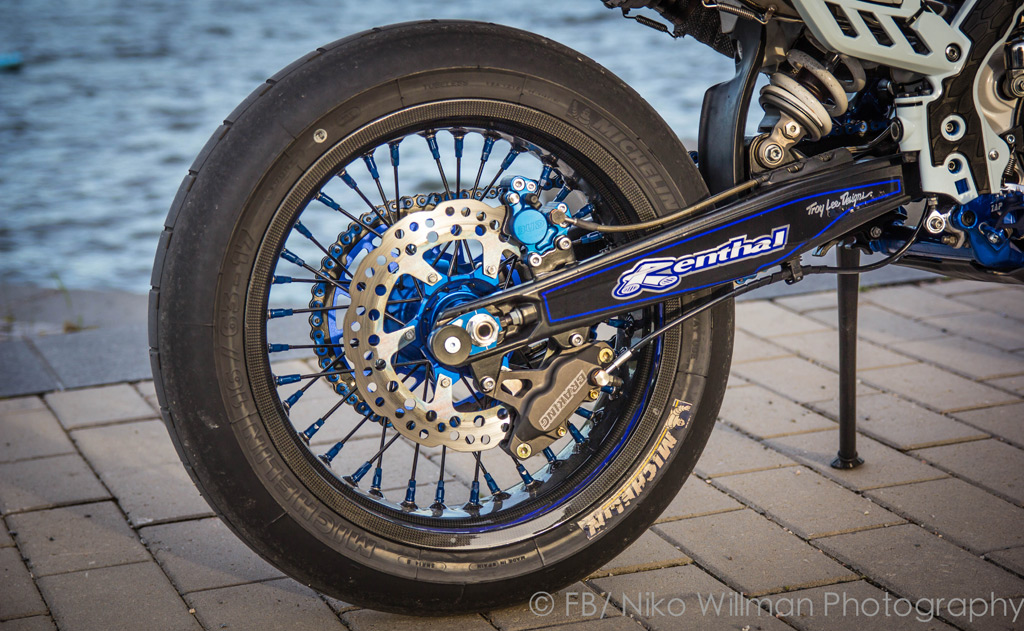 This is my second supermoto project, before I build a KTM EXC 125 with a couple nice parts. It was nice to ride, but sounded like a chainsaw and smelt like a lawnmover. The engine on that one was also little bit tuned and fun on the rear wheel. I already tuned this same bike to look like a police bike for last summer, but it was just like 2 months long project from stock exc to a cop version. I do not have any plans for the future, but I'm pretty sure that next project it going to be a car. 2-door impreza wrc replica, 454ss chevy or something like that... 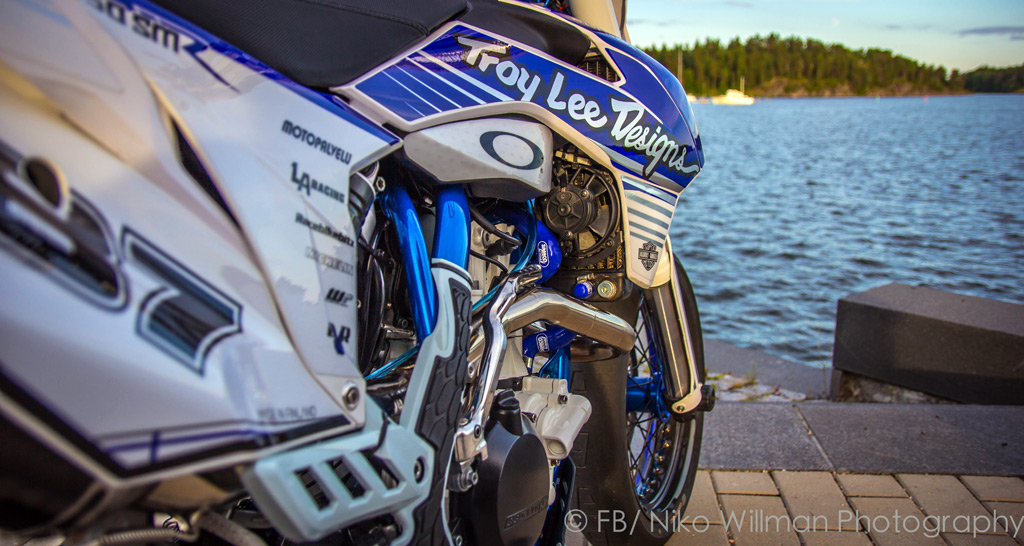 Have you got any tips or advice for people that want to start a project like this?

If you want to start project like this, make sure that you have enough time and motivation for it. When you don't have time, nothing happens. You have to sacrifice couple bar nights/not going out with friends and much more. When you don't have motivation, nothing happens. Everyone that have some kind of projects knows that it will take much from you to kick your own ass to get your self to the garage and do something that pushes the project forward till the Finish. Good tip is to go watch other peoples creations at car/motorcycle shows and try to get motivation from there for your own project.

When your project is Finished, I promise. It all was worth it. 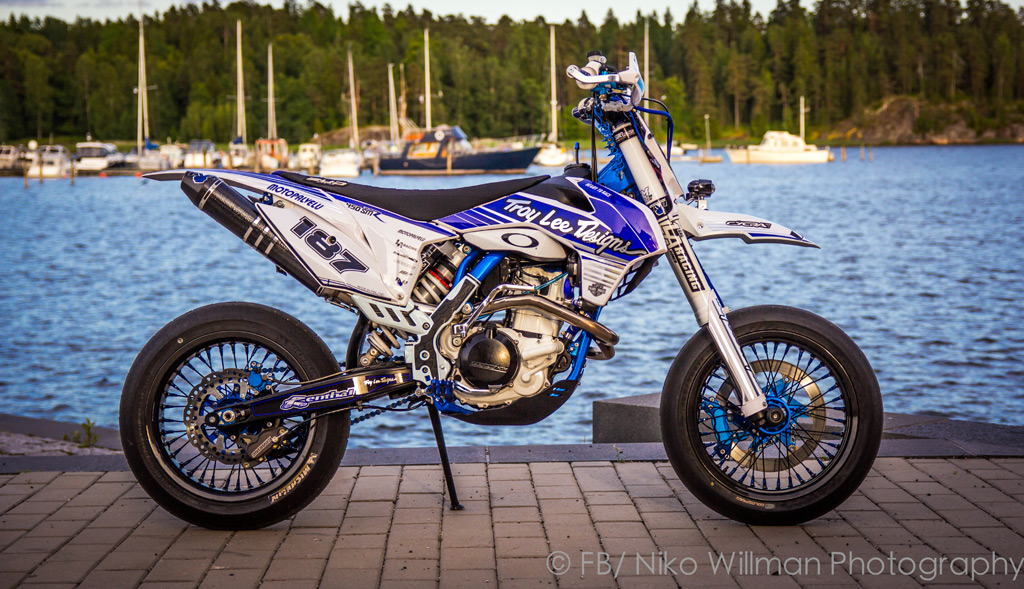 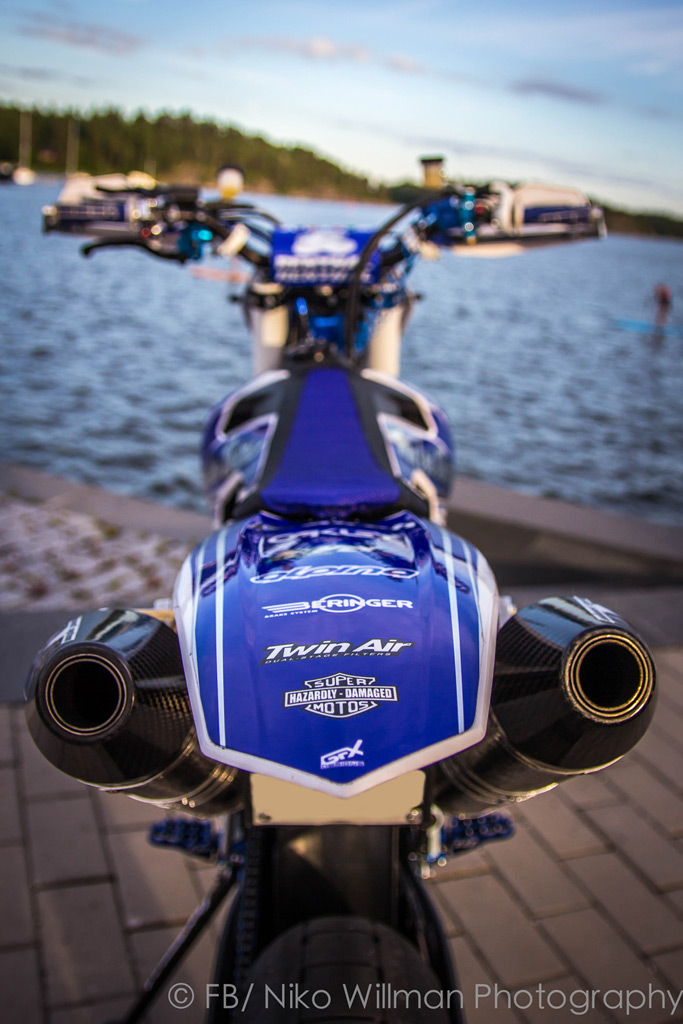 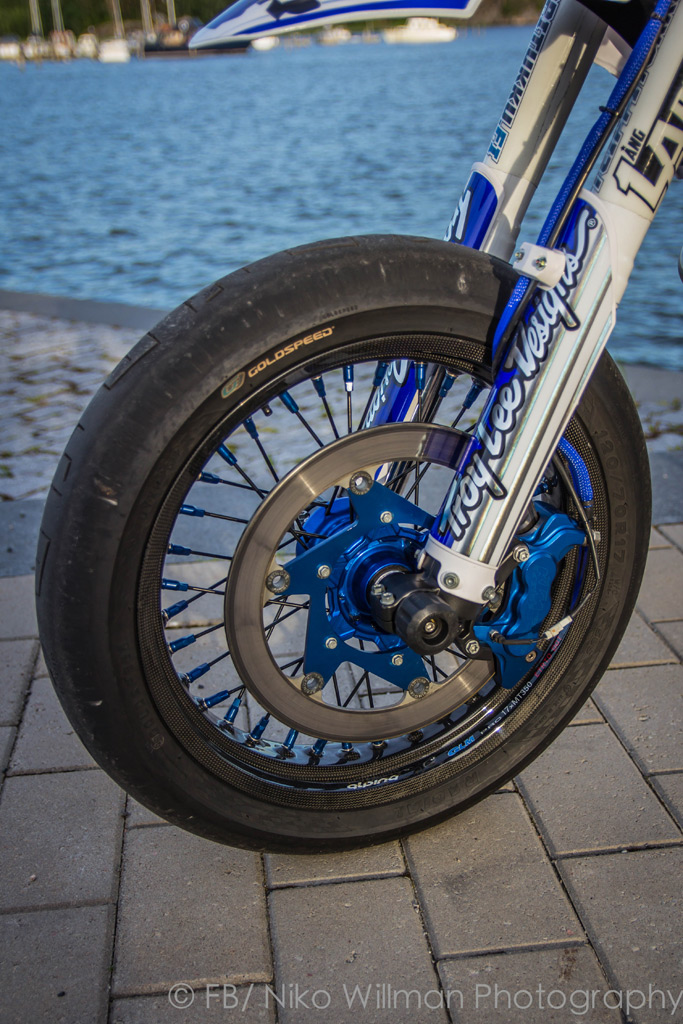 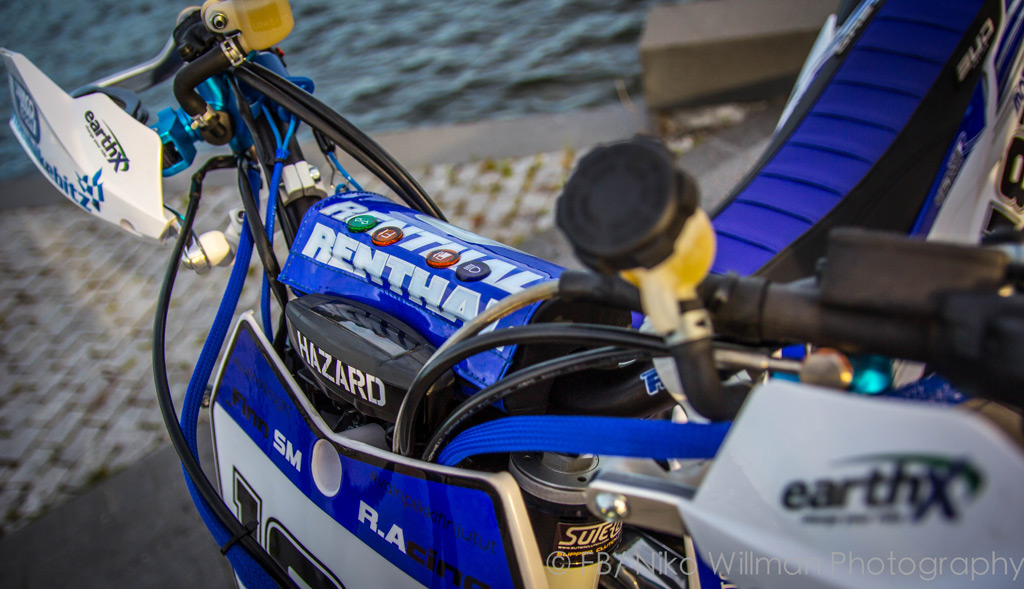 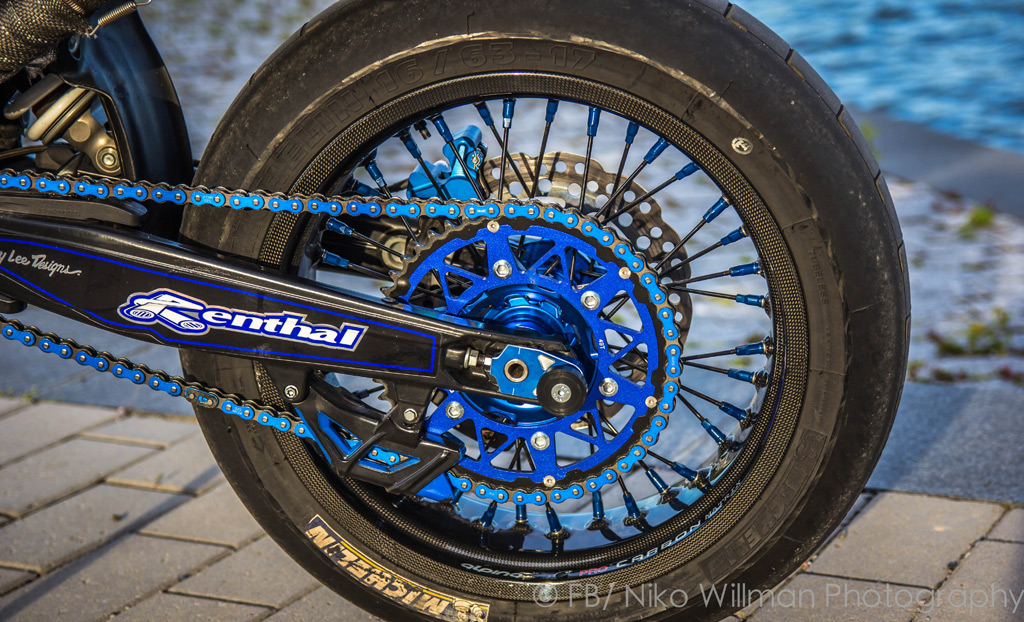 Custom Headlight on the fender

Michelin medium compound race tire on the back

Lowered cylinder from the bottom